The Best Player in the NBA

Who else blocks this shot? Who goes for 37-9-12 and blocks the game clinching shot? I mean, look at this picture, he has to jump over Anthony Parker in order to make this play. Fucking ridiculous. 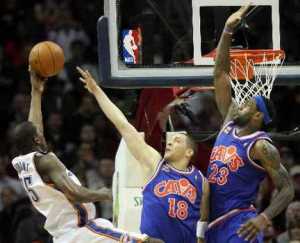 I think it’s safe to say that we’re now into LeBron’s prime, no? He put the Cavs on his back and willed them to a win last night. The Boobie Gibson experiment had its ups and downs. Gibson didn’t have a particularly good game but he hit the go-ahead trey to give the Cavs their final lead.

While LeBron will deservedly get the headlines, this was a solid team win. Boobie hit the big trey, Shaq was imposing his will (sorta), J.J. Hickson put up 9 and 9, and Jawad Williams scored a career high 12.

It’s not going to be easy missing Mo Williams and Delonte West but the Cavs should be somewhat OK. It’s going to mean and increased and more consistent role for Shaq, who dominated stretches of Saturday’s game. The big fella finished with 22 points (on 1o shots), 6 boards, and 3 assists but was only 5-16 from the stripe. As a team, the Cavs were just 20-40 from the line and it very nearly cost them this game (the issues at the line worry me. It hasn’t really cost them a game yet and I hope it doesn’t cost them a game they need down the road).

All in all, good short handed win. The Cavs finished up their ‘best player other than LeBron’ three game run on Monday night when Dwyane Wade and the Miami Heat come to town.

This entry was posted in Cavaliers. Bookmark the permalink.

53 Responses to The Best Player in the NBA