I know this is a day late, but I still can’t get over the Cavs win over the Clippers on Friday night.  I’m not sorry to say that that game was one the best live sporting experiences I’ve ever had (right up there with this). The crowd was fantastic, they had no business being that loud for a mid-February game against the Clippers.

I know that this win doesn’t change anything. This team is 9-45 and their season is pretty much done.  They’ll be a picking high in the draft for the next couple of years.

But that game on Friday was f-u-n. I went in thinking that Blake Griffin would dominate and that I’ll get to see the Cavs make history with their 27th loss.  After they somehow laid an egg against the Pistons, my expectations weren’t that high.

This was my second Cavs game of the season (I saw them get blown out by the Raptors… how is that even possible??) and both times I was struck by the number of young people in the crowd.  Not kids (though there were a decent amount of children) but young adults.

The Q (especially the upper levels) was filled with guys and girls in their 20s and 30s.  The LeBron-era Cavs made good inroads with my age group (I turn 28 on the 25th) and there seems to be a decent carry-over to this post-LeBron debacle. If Gilbert and company can right this ship (at least set up a 3-4 year rebuilding plan or something), the crowds will come back.

As for the game itself, there was to like and dislike.  J.J. Hickson played absolutely fantastic. You could tell he was excited to go against Blake Griffin. Which is all well and good, but the Cavs need J.J. to play with that energy and agressiveness all the time, not just when he faces a great player.  The overall offense was solid but their shots were falling too. Mo Williams (just a bit of an upgrade over Manny Harris), Anthony Parker and Jamison all took questionable shots (AP had a late “no no no no no YES!!!” floater), but the majority of ’em dropped.

The defense still stinks and the Cavs still had some brain farts (Mo had a LeBron-esque “dribble dribble dribble dribble hoist a shitty jumper” play) but they won.  They didn’t set the record for most consecutive losses by a major North American sports team (merely tied it! Suck it, ESPN and the rest of you take shots at Cleveland!).

Sports is supposed to be fun and a diversion. The winters in cold weather cities are that much worse when the local sports team sucks.  And with the five-win Browns and nine-win Cavs, this has been a particularly shitty winter. But Friday’s Cavs game was fun (I really can’t say that enough). The weather was freezing, the Cavaliers were losers of 26 straight but they played hard and the fans had a blast (people were cheering and whooping in the streets after the game).

The Cavs tried their best to lose the game (they can blow 6 point leads like *that*) but down the stretch they played great defense (I would’ve died if Hickson’s block at the end of regulation was called a goaltend…. like it should’ve been) and hit some timely shots.

It was a nice change of pace. 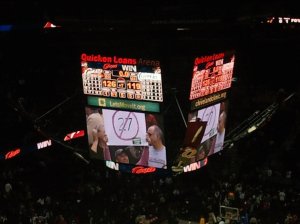 This entry was posted in Cavaliers. Bookmark the permalink.